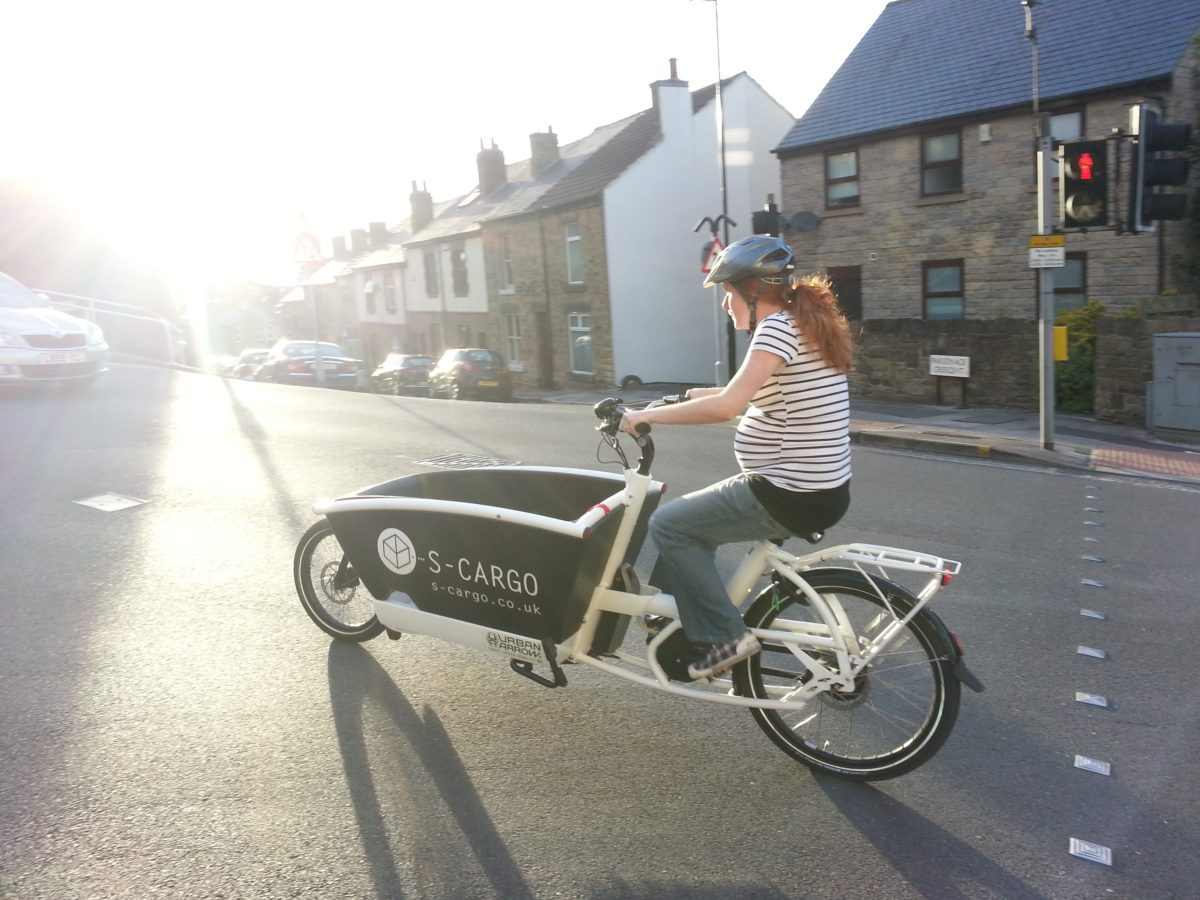 But many people (or at least those who can afford it – and for a third of Sheffield who don’t own cars it’s mostly for that reason) feel that having children means a car is essential. We’re not judging people who do, but we don’t think it is the only way to get around or to enjoy life.

So. How to get around the city, or out of it, with tiny ones?

Mostly so far we’ve been walking or using buses, plus a few lifts from generous friends. Walking’s great and you see a lot more of your local area, but it limits what/who you can take with you, how far you can go, and takes a while. Waiting for buses isn’t really the fun way to do things, and though they’re still cheap compared to owning and running a car (at least £3 a day by my reckoning, just to own one, plus fuel for the trips you make and possibly parking too), tickets on now-private buses aren’t as cheap as they might be (£4 each for a return trip to town).

Cycling is the other obvious option. When we lived in Ayr, we got into town by tandem almost all the time (with taxis as backup, mostly to get to the station). Louise especially preferred to cycle the few miles to college when it rained, rather than walking to the bus stop, waiting, and then being crammed, dripping, onto a damp, steamed up bus. A bit of fresh air, independence and gentle exercise with your rain is far nicer. (It actually doesn’t rain that often, either.)

But with a baby, how can cycling work?

Glad you asked. Welcome to the world of the Dutch cargo bike… 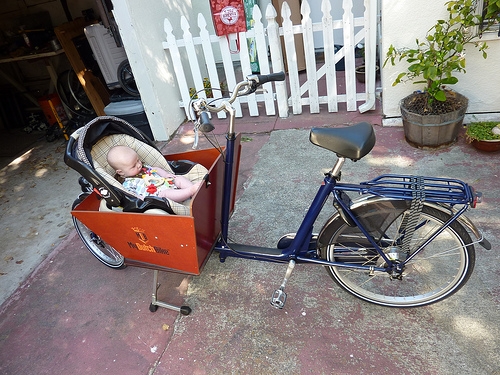 Being able to put a ‘car’ seat in the box gives you the only real way to take a child under about 12-18 months on a bike at all. But it’s more than that. Once they can sit for themselves two of them can use the bench seat facing forwards, and you get much more reassuring sight and containment of them than with seats perched on the back or the crossbar (and you can chat as you ride). You can also chuck loads of shopping in the box. And it’s way better than having a little trailer bouncing around somewhere behind you.

Which cargo bike to go for?

(I’ve included a few details for those who may be interested, hopefully without getting too nerdy for everyone else.) 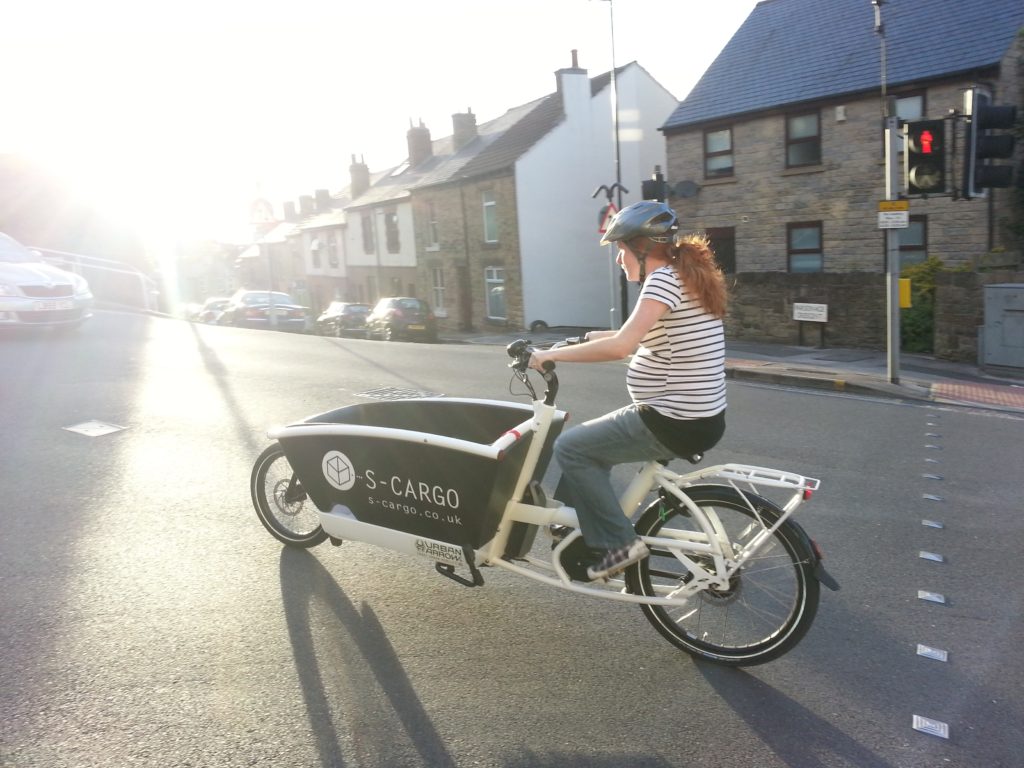 Our first try was an Urban Arrow. This is the slick ‘modern’ option, and available to hire from S-Cargo in Sheffield. Louise found the built-in 250w electric assist enough to ride it easily up the non-trivial hill to Crookes, at 39.5 weeks pregnant. Cycling isn’t just for the athletic and able – with the right facilities it can be mobility for everyone. And with proper bike paths protected from traffic, you wouldn’t have to be brave either.

As a first cargo bike experience, it was good, but it felt pretty ungainly. It handles a bit like a barge and is pretty hard work to do a hill-start on, before the motor kicks in. However, drivers do tend to give you plenty of room without agro (they seem to see you as more than ‘just’ a bike), and you get a smile from almost everyone who you pass. 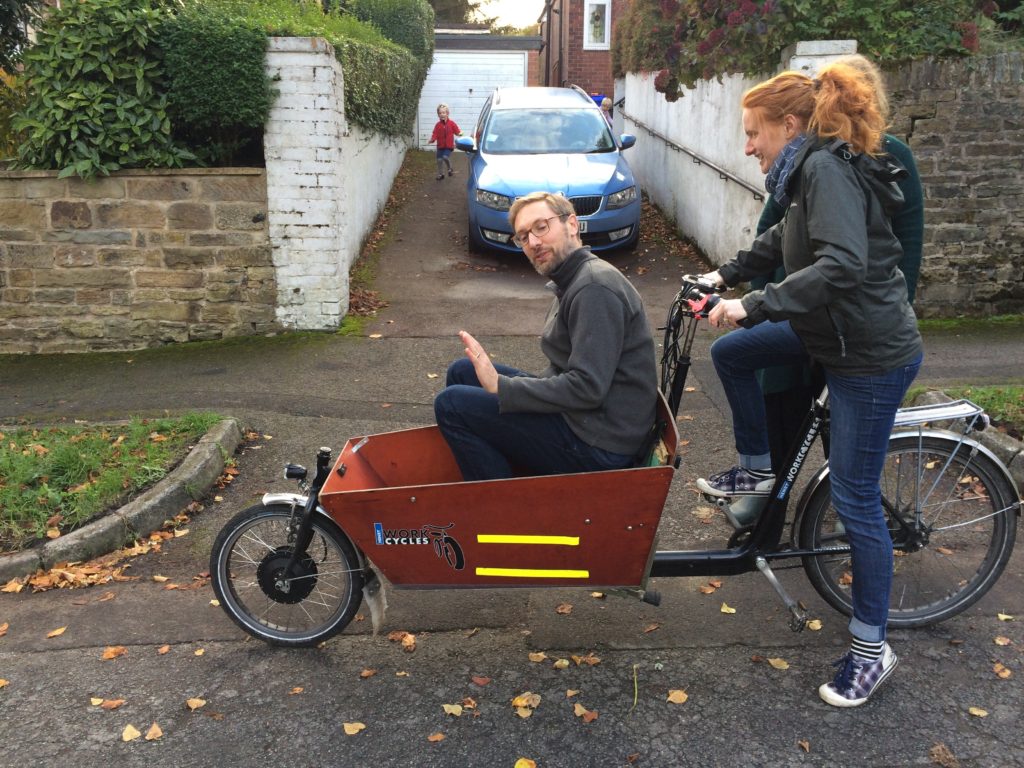 Second we met some new friends who have an older Bakfiets which they’ve converted to electric assist themselves to suit their everyday use in Sheffield (note the front wheel motor, using an Ezee kit).

This more classic cargo bike turned out to have much nicer handling than the Urban Arrow, and the power felt more lively too. So much for the ‘trendy’ option.

We then took a trip to visit the School Run Centre bike shop in Cambridge, one of the few places in the UK to specialise in cargo bikes. We got to test-ride a Shimano STePS powered Bakfiets (note the motor built into the frame around the pedals, like the Urban Arrow), which seemed to be the proper way to get power. 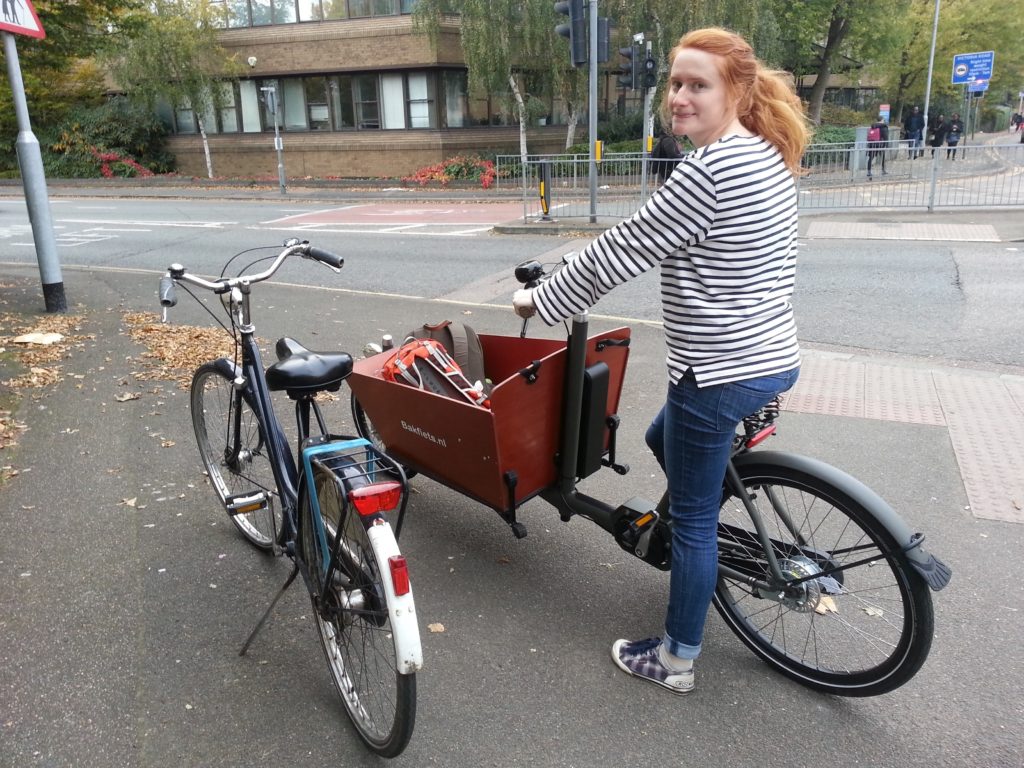 It also has electronic shifting gears (ooh, posh) which can even shift themselves like an automatic car (even posher). But on a token hill test (Cambridge, ha) they seemed to work frenetically and weren’t much help. There’s a lull in the motor for shifting and they beepbeep each time they change (why?! No cars do this), so you really don’t want shifts that you don’t need. So Louise switched to manual. But also, why should you have to ‘turn on’ a bike to be able to shift gear? It just seems all wrong.

After lot of chat with Hugh at the bike shop, I’m persuaded that the better thing is to get a standard Bakfiets without power and have it retrofitted with a front-wheel motor system like a Heinzmann. It’s not much cheaper than the built-in mid-drive models (which I assumed would be the only reason why you’d retrofit), but it also means you can get more motor options, it pulls you out of wobbles and into a straight line, and you avoid any extra strain the mid-drive motor would put through the chain, gears and rear spokes. It also means you can use the Bakfiets Aero aluminium frame which comes with super-powerful Magura hydraulic rim brakes and saves a good few kilos. That makes handling better and it’s easier to manoeuvre, especially when not riding.

The only thing now is to work out some, erm, cashflow, build a bigger bike shed, and see when we can order… and hope that ‘Brexit’ doesn’t push the price of Dutch imports up any further. Maybe some kind Leave supporters will organise a whip-round.

Expensive? For a bike, maybe yes (though understandable for a non-mass-produced product of very high quality and durability), though it is virtually free to run (charging is about £8/year when used daily). I’d simply compare it with how much a car costs to own and run. It’s the car that looks like the expensive option to me.

As well as giving us regular exercise without even thinking about it (gym? Pssh), bikes are more fun – how many children love being in the back of a car? (Oh, and more sustainable blahblahblah – not adding to the air pollution, noise and parking horrors in Sheffield, or climate-changing emissions costing people everywhere – a major selling point to us, but not, perhaps, what tips everyone’s choices).

It’s is a bit of another world for cycling. Obviously it is flat which helps (but most flat UK cities have far less cycling, and the hills aren’t what put most people off in Sheffield, it’s the traffic), and it has some great infrastructure items like this bridge at the station, and a big cycle parking hub.

In our brief foray I felt like there was actually very poor cycling provision in Cambridge on the roads themselves. There were the usual British addictions to painted lines guiding bikes into gutters and the like – which invite drivers to break the highway code on passing distances and make things more dangerous than if there was nothing. Also key access roads like Hills Road have aggressive traffic squeezing people on bikes almost off the road. So you do spend much of your ride dicing with flows of traffic, which would seem ridiculous in many cities in the Netherlands.

But despite this, quite a number of people do cycle. It is wonderful to see so many bikes, and people just enjoying city cycling without making it a big ‘get out your lycra and hi-vis’ deal. It’s also a lovely problem to struggle to find a bike parking spot (because every available railing and post has bikes on it already).

I even rode the sit-up, step-through, Sturmey-Archer 3-speed (see the photo above) the like of which I used to be embarrassed of my Dad riding. So comfortable! So practical (maybe need a few more gears for hills)!

5 thoughts on “In search of a family car(go bike)”